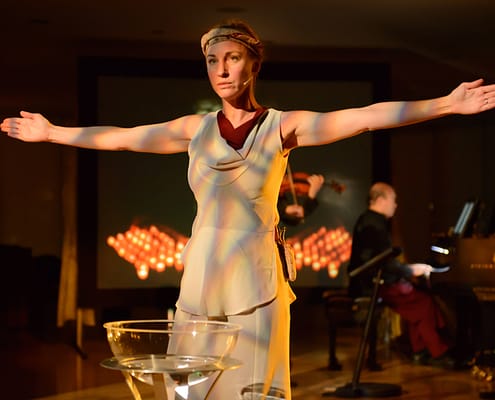 Constantinople, composed by award winning composer Christos Hatzis, is a multi-disciplinary theatre work set against a backdrop of vibrant images. Constantinople won a 2008 Juno Award and noted by the Globe and Mail to be ‘one of the most talked about contemporary classical compositions of the decade’.

On 25 November 2013, sections of Constantinople were performed at a special convocation at Trinity College, University of Toronto, held to confer an honorary degree upon His Highness the Aga Khan. The Ismaili Centre, Toronto, will host three special, site-specific performances of Constantinople on November 26, 27 & 28, 2015 to conclude Cities of Arrival — a curated program of lectures, workshops and performances exploring the pasts, presents and futures of cities and urban spaces.

Constantinople explores the spirit of an ancient city: the cultural crossroads of East and West, a diverse urban centre often challenged by political division and clashes of faith, and a reminder of what can be beautiful in our complex, often divergent modern existence. This work also speaks about modern day North-American urbanism, where cultural diversity is a new—the only—emerging identity. Constantinople is about present day urbanism with its multiple faces and its multiple histories: our cities, which—like the Constantinople of old—are poised to become a living experiment in the future culture of the “global village”.

Produced and performed by the Gryphon Trio, one of the world’s top chamber ensembles comprising violinist Annalee Patipatanakoon, pianist Jamie Parker and cellist Roman Borys, along with vocalists Maryem Hassan Tollar and Patricia O’Callaghan, Constantinople is a collaborative work that speaks from the heart about cultural inclusion. It is a metaphor for a utopian vision whereby the cultural and religious diversity of our world today—normally a cause for conflict—can become the seed of future peace and unrestrained creativity.